Art and Culture in Madhepura

Madhepura is a historic place and known for its enriched culture and tradition. The tradition of the city that has been thriving since ages. The city is known for its distinct cultural traditions. Major festivals like Holi, Diwali, Dashera, Eid, and Christmas all are celebrated with much enthusiasm and participation. The modern time is going ahead with high profile parties, disco, night life but Madhepura is far away from that. Madhepura still believes and practices the core and basic values of Indian culture and traditions. Dance, Folk Music, Opera, Paintings, sculpture making are the integral part of the society and community. There is harmony in the society and people from all religion, caste and creed live life peacefully in the city. There are temples, mosques which are considered as the root place for the people to be connected with their root culture of religion
. 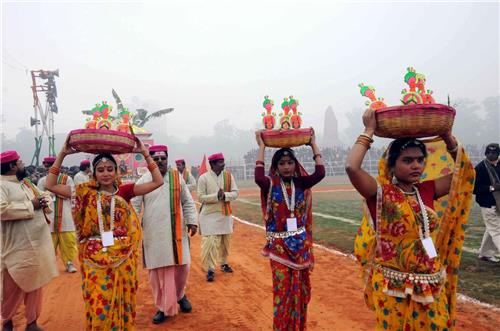 People from all religion are staying in Madhepura since long time. Hindu, Muslim, Christians, Jain, Sikhs all can be found in the city. People from neighboring villages including those belonging to tribal communities have also settled in Madhepura The famous temples around the Madhepura City are Shiva Temple, Durga Temple in Murliganj, Kali Temple, Singheswar Temple and many more. The religious practices are strong blocks of the culture of the Madhepura. There are many temples, mosques and churches small and big found in the area and all are attended by many people.

The most spoken and popular language of Madhepura is Magadhi. This is an important language of ancient India. Magadhi language in Madhepura is considered to be thousands of years old. It is said that there have been many changes in the ancient language, but the frame work is still the same. However, Hindi is also understood and spoken everywhere. The official holdings, banners, and other posters are normally written in Hindi language. There is no such language problem in Madhepura. Madhepura along with other Mithila region was not so happy to accept Hindi as the official language after independence. However, the rule was imposed so as to maintain the integrity and uniformity of the state. There were other languages like Bhojpuri, Maithili, and few local dialects are also spoken.


Music and Dance in Madhepura

The flavor of music and dance has always been seen in Madhepura. It is one of the important cities in Mithila region of Bihar and the music and dance follow the same steps. The folk songs are played with instruments like Dholak, Vanshuri, Table, Harmonium and others. The folk songs are especially famous during the festival time of Holi, Dushera, and Diwali. Dance of the region is more or less connected to the drama and theater aspect. Bihar has gone through many changes in terms of culture, but Madhepura has been strong enough to absorb those and try not to harm the culture of its own. The drama and theaters are purely based on music acts. The popular folk stories are generally played on the stage which will have some morals into it. However, the recent development cinema is killing the theater and dramas.

The Visual arts of Madhepura are very popular and famous. The area falls under Mithila Region and it is famous for the visual arts especially paintings. All five style of Madhubani Arts Bharni, Katchni, Tantrik, Nepali and Gobar are practiced and performed here. Apart from the paintings, sculptures and architecture is also prominent in Madhepura. It has been noticed that ancient sculptures and architecture present in the city are quite phenomenal. People still consider painting and sculpture as professional scope as well. There are very less places in the country where Art is performed with such dedication and wonderful style. However, irony is that the art and culture of Madhepura have not been that much praised. The tradition and progress of Art and Culture of Madhepura have been a different story altogether.

Madhepura is more inclined towards the Indian culture and the dressing and the costume displays that. The costumes of women are generally Saree and Salwar-Kameez. There has not been much influence of the modern costumes for the women. Men’s wear, however, has progressed a lot in terms of western influence especially for the young generation. On the other hand, the elder generation still wears Dhoti and Kurta in traditional way.

Madhepura has special cuisine in terms of delicacy of the food. The core cuisine favor of Mithila region is found in the Madhepura area as well. The famous food style found in the region are China wala Roti, Alu dam-puri, Makai ke Lawa, Fish and of course Pan or Betel Leaves. The cuisine and food of Madhepura are delicious and unique in style. It has been noticed that the style of the cuisine followed in Madhepura is not followed anywhere else in the Mithila region that make it even more special.

Comments / Discussion Board - Art and Culture in Madhepura